Three days later and I finally arrived in Kathmandu, Nepal. Spending a night in Bangkok was interesting as my hostel happened to be right next to the red light district of Patpong, made infamous by American GI’s who were on R&R during the Vietnam War. I went out for a walk to buy some souvenirs for people and was constantly propositioned to go into bars, watch shows, get massages, etc. Strangely, the seedy parts seemed a bit overshadowed by the markets in the middle of the road selling all forms of knock-off merchandise.

Nardev Pandey, program director for Internship Nepal, picked me up at the airport and was quickly made our way to his humble abode. One they way I got a brief glimpse of life in Kathmandu, hundred of motorbikes, crowded tuk tuks, smoke spewing out of exhaust pipes, small shops, outdoor food stands and more. Later, Nardev took my around his neighborhood, showing me Singh Durbar, which houses many sections of the government, Kathmandu Fun Park, local parks, and markets.

Upon arriving back at his house, I met one of the other interns, Rene Edde. She began to tell me about the types of experiences that she had been having with the Internship Nepal program. Originally, Rene was to work at Spotlight Magazine. However, upon her arrival, Nardev informed her that Spotlight actually has no photographers because they merely reprint the non-edited (full versions) of what went into the newspapers. Instead, she was assigned to VOW and BOSS magazines, which are a women’s and business publication. Unfortunately, instead of shooting hard news, she was shooting fashion shows and tea parties. There was even a four page section dedicated to photographing Nepali celebrities in funny or compromising situations. Not exactly the hard-hitting journalism or portfolio material one hopes for when travelling to another country.

The next day I was to meet with my publication, the Nepali Times, a weekly paper. From what I heard from Rene, I was a little worried that my situation would take a turn for the worst as well. The editors that I met there seemed to have no idea about the Internship Nepal program. I was told that they don’t have any internships, but if I wanted to tag along with their photographer I could, and they would publish images if they were any good. They also did not know how I knew Nardev, asking if we were friends for some time. I was a bit disappointed, but hopeful because the Nepali Times seemed like a better fit than photographing tea parties.

On the way home, Nardev felt I should stop and take time to photograph a traffic jam, saying that the newspaper might be able to use it for the next day. He also decided to stop off at the zoo. He told me that Kiran, the photographer from the Nepali Times, wanted to meet with me in an hour, so there was no point in heading home. Sadly, this was just one of many lies that Nardev said to myself and Rene in our short time with him. Arriving home, I called Kiran only to confirm by belief that, no, we were not meeting that night but tomorrow. Nardev was merely trying to keep me out of the house to keep myself and Rene apart from each other so we could not confirm our suspicions about the program.

Apparently, Nardev was also lying when he said that all of the cell phone lines were used up and we would have to wait to get one, that only Nepali citizens could get cell phones, that he already deposited my money (it was in his desk, he took it out while he was talking to me (right before saying he didn’t have it), telling Rene that her check had not cleared yet (it cleared after the fifth day), the list goes on and on, and for no apparent reason. We also had no language lessons or culture lessons as stated on the website.

I am not sure that I feel comfortable in staying in this program, as I do not know if I will get out of it the experience that I want during my stay in Nepal. This is especially true because I feel I can not trust the one person I should be able to depend on to help me in an unfamiliar place. 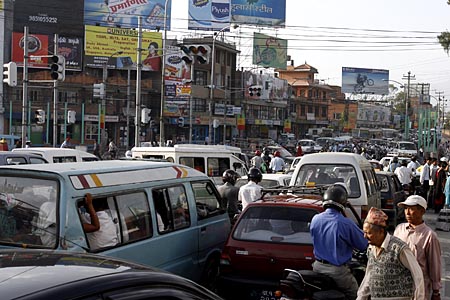