Friday was the second time during my internship that I had to capture both stills and video.

The first time was the turtle races, whose video I posted earlier. That assignment was not as bad because I only had to take a few stills for the paper and, due to the nature of the event, repeated heats of turtles racing, I did not feel as though I was missing out on any particular aspect of the event.

Friday’s event, a lumberjack show similar to what you might see on ESPN’s Great Outdoor Games, felt like much more of a challenge. I needed to have a couple of photos for the paper, a photo gallery online, a copy block and the video of the event. Thankfully, my photo editor took care of the copy block while I was editing the video. 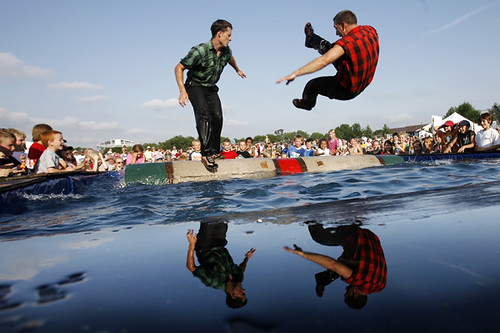 I had a difficult time in deciding what parts I should take video of and which parts to photograph. I ended up taking video of most of the exhibition, and shooting stills on the events that lasted longer or had more than one heat, such as the logrolling event above, in which there were three races.

One thought on “Two for the price of one”