Recently, After Effects has become one of my favorite programs to play around in. I admit, I am pretty much in love with typography and infographics, so becoming enamored with AE was the next logical step. However, the majority of tutorials out there are focused on special effects for film or title screens. Here are some of my favorite tutorials that I believe could have some sort of journalism applications.

My friend Shaminder is convinced that this is overdone, but I still enjoy the effect. You’ve seen it in everything from Ford commercials to the initial Cee Lo Green F*ck You music video (not to be confused with Skee-lo).

An extension of the previous tutorial, this one includes additional animation and camera moves along with the kinetic typography.

This tutorial shows you how to utilize scripts in After Effects to pair an effect with some external file or database to create an interesting 3D fly-through effect. It could be paired with something as mundane as text from a speech, or perhaps graduating seniors and their senior quotes, or something as serious as a list of casualties from Iraq. Koci used it to great effect in his Interrupted Lives piece on Iran (the effect is just about 1:00 in). 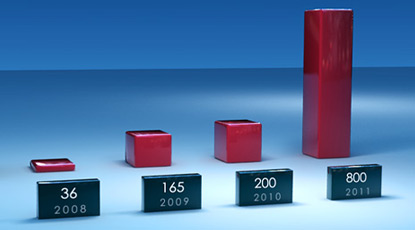 This one seems straightforward enough … You could use it to add a little interest/graphics to an issue story filled with numbers.

This tutorial has arrows jumping from point to point as you move along in your travels. I’m not sure just what I would use it for yet, but hopefully you have a story that it would be useful in. Similar to this is the Trim paths tutorial, that features an animated red dashed line instead of arrows.

I doubt you are going to be filming a golf video anytime soon, but motion tracking comes in handy for a number of things, from effects like this (if you were profiling an athlete for an all-state prep sports feature) to using it for image stabilization.

Twixtor (a $300 plugin for After Effects) takes video shot at 60fps and slows it down to 1000 or even 2000 fps. The tutorial gives some guidelines on how best to shoot prior to importing into After Effects, and then what settings are recommended once you are using the plugin. There also exists a built-in plugin called Time Warp, though I read that its algorithms are not as sophisticated and result in more artifacting when video is slowed down.

Endlessly zoom into your own Droste Effect

This one just seems fun.

Bend flash video in After Effects

This tutorial shows you how to take a flash video and bend it around the geometry of an object that you have in a background photo. I could imagine using something like this if I was trying to build out a landing page and had some sort of looping intro video that I wanted to appear integrated into the scene.

This tutorial reminds me of the sort of movements seen in the RJD2 music video for 1976 on MediaStorm … or perhaps of those NBA Where Amazing Happens commercials. It involves cutting up a still image into different layers and having them move at different speeds in relation to each other.

2 thoughts on “Top 10 After Effects tutorials with journalism applications”