The next stop in my visit to Nepal was to be Mudikawa village in Parbot District. Here I saw the work of Rishi Tiwari, who was working to empower the farmers in his village. I began my mini-excursion in Pokhara, in the company of Ashoka Fellows Rishi Tiwari and Lucky Chetri. We traveled by taxi for two hours from Pokhara to Kusma. Here we left our ride and began our trek on foot. 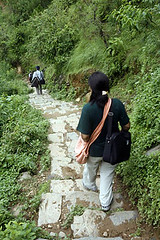 We descended down from the plateau on which Kusma sits until we reached the banks of the Modi River. After taking a rest in the forest, we continued on until reaching a suspension bridge. 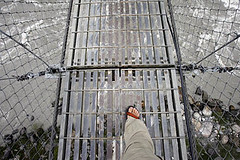 After crossing the river we began our upward ascent to Mudikawa. The trail was narrow at times, the steps small, and the rocks slippery from the recent rains (all of these conditions apply only to me, as Rishi had no trouble whatsoever in making the trip). 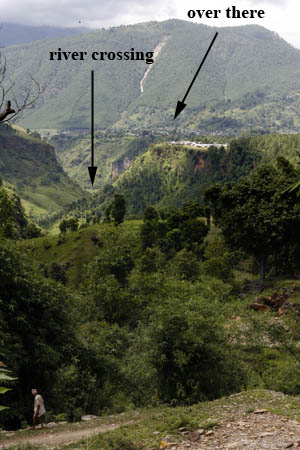 We started over there, in Kusma, crossed the river, and made our way to Mudikawa.
We were welcomed very warmly into Mudikawa. 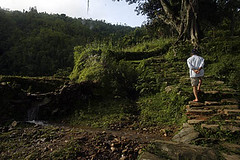 Rishi took the time to show me around the village and I saw all of the work that they had accomplished. I spent my nights in Rishi’s father’s house. Just as I traveled from house to house, they too often received guests. I learned that each time you visited it was polite to stay for a while, have tea (I had a lot of tea), and catch up on what was going on in the village and elsewhere. At the Tiwari house, large amount of time was spent in socializing within the family. Whenever they were not in the field, they were sitting together, young and old, and talking. They do own a television and used it, but more often than not a visitor could find them sitting outside on the porch. 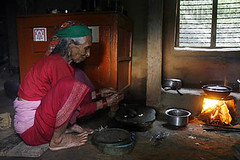 It seemed as though Rishi’s mother, Mina Kumari Tiwari, was always busy cooking meals or preparing tea and snacks. 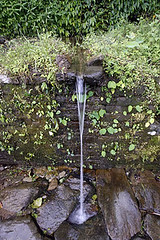 I showered outside near the fields. I left after spending three days there and I hope to return again soon.