After a long and eventful day in Washington D.C., many of us were relieved to know that our meeting with the Associated Press on Thursday was not until 2 pm. With many thanks to SJSU alumnus Paul Sakuma, we were to be met by Business Photo Editor Jonathan Elderfield and given the grand tour around the AP offices. 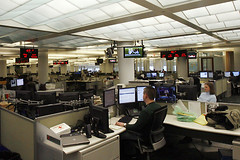 I am not exactly sure what I was expecting during my visit to AP, but whatever it was, it was definitely exceeded. For starters, the newsroom felt expansive. Everything and everyone was on the same floor, in plain sight of each other. The AP sports, multimedia, national, entertainment, television and video and radio departments as well as the AP New York bureau all had quick and easy access to each other’s resources. We made the rounds to the various photo departments, and Mr. Elderfield explained to us what life on the desk is like, working with the photographers, sifting through incoming photos and pairing photos with appropriate stories.

Our group was in for a surprise when we had the chance to meet one of the sports multimedia producers for AP, Brandon Garcia. As it turns out, he is a San Jose State graduate from 1999. To be honest, I was not aware that AP produced multimedia packages that were distributed out to their members. Mr. Garcia showed us that, not only did AP do multimedia, but, with two multimedia producers and one graphic designer, they did it well.

At the time, he was working on a package for the upcoming MLB All-Star game in San Francisco that would serve as a sort of guide to fans new to the stadium. I think, though, that the presentation that impressed our group the most was a piece that was put together during this year’s Super Bowl (if anyone has a link please let me know). The presentation consisted of a graphic of a football field, with colored arrows representing the drives made by the two teams. Little camera icons represented images of key plays that, when clicked on, would pop up. If I remember correctly, clicking on the arrow would give a drive summary. I am not sure if there was any audio or not. What impressed us the most was that they were updating the presentation live, as the game was unfolding, and were typically only four plays behind the action. 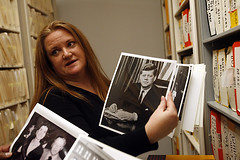 As if meeting a SJSU alumnus who was working as a multimedia producer wasn’t enough, we were then taken to the AP photo archives. Most of the organizations we visited before had strict policies on photography. Geographic did not allow us to take any photos of their layout room, at Rolling Stone it was the offices that were off limits, and for the New York Times no photos were allowed in the whole building. So you can imagine our surprise when, not only were we allowed to take photographs while in the AP photo archives, but we were allowed the opportunity to browse through the incredible resource. We examined war photos, presidential photos, entertainment photos … some wanted to see Tupac, Dr. Cheers wanted to look up Fidel Castro and compare the images to some that he took. I ended up looking up WWII, Mao Zedong, and Magic Johnson.