I am stuck in McCarran International Airport in Las Vegas with nothing to do but blog. 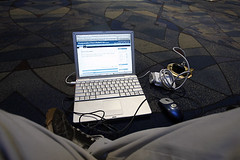 I was returning from a one-day orientation at the St. Cloud Times in St. Cloud, Minnesota, where I will be spending my summer as a photography intern. I flew out to St. Cloud on Tuesday night, with layovers in Las Vegas and Minneapolis. I flew back on Wednesday night, but a late connecting flight from Minneapolis meant I missed my Vegas to San Jose flight. 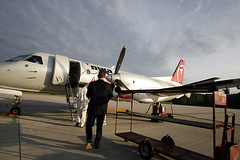 TaLezia Calloway, the other Chips Quinn intern, and I got the grand tour of the paper; its newsroom, advertising, production, warehouse, and of course, its press. 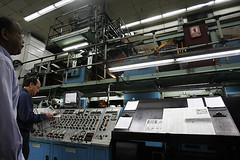 Everyone was more than welcoming and, after meeting the photo staff, I know that my summer will be anything but dull. I will be shooting a variety of photo assignments, filling in for vacationing staffers as needed. The St. Cloud Times is also riding the Gannett “Information Center” wave, and has four video kits and two video editing stations (with huge Apple cinema displays). I hope to experiment with those as well as my audio recorder throughout the summer.

In talking with one of the photographers, we agreed that, in the case of many photographers shooting video now, the style that they have developed throughout their careers has not easily translated through to their video. Rather, they are still coming to grips with the technical side of shooting video, and are perhaps too worried with the proper settings and techniques to be able to let their vision shine through.

I had forgotten how green Minnesota was. I had also forgotten that the Mississippi runs through it. For those that were unaware, I once volunteered as a park naturalist in Voyageurs National Park in north-central Minnesota. It should be an interesting summer.