Back to posting… hopefully on a more consistent basis. I’ve been at work two weeks now, shooting mostly features and getting a better idea of the lay of the land.

Ken Thompson and his daughter Kendra, 7, take a break from shoveling snow off of the front of their West Des Moines home on Thursday, January 17th. 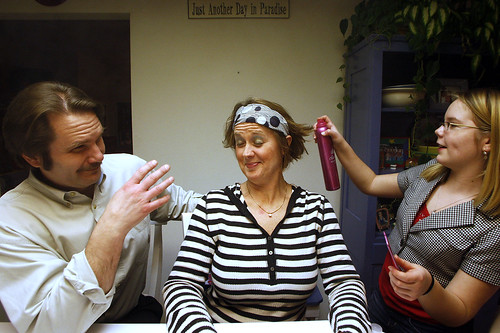 10-year-old Katherine Claes sprays her mother, Anne’s, hair as her father John watches on in the kitchen of their Johnston home. Katherine has joined her parents in show business, helping with her mother’s hair and make-up as they star in the second act of the Plaza Suite at the Ankeny Community Theatre.

4-year-old Nathan Waknitz, from Clive, Iowa, listens as Erin McDonough reads during toddler storytime at the Waukee Public Library on Thursday, January 10th. The library has been holding evening storytimes for toddlers every Thursday at 6:15pm since September of 2007.