The brainchild of SJSU photojournalism professor Michael Cheers, 50+ students from the San Jose State University school of Journalism and Mass Communication traveled to New York to spend their spring break visiting newspapers, magazines and advertising agencies in hopes of learning more about and furthering their careers. 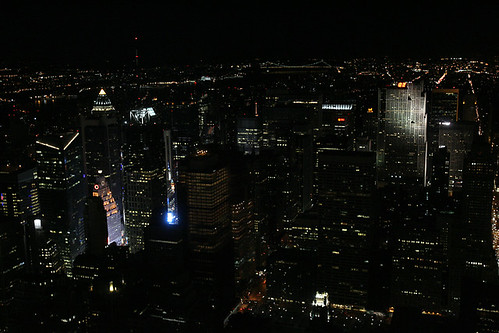 The first day of the SJSU Journalism Department’s spring break trip to New York brought its students to CNN/Time Warner and the New York Times.

Our group spent a few hours at CNN/Time Warner and they had something ready for everyone. We heard speakers that dealt with photojournalism, marketing, journalism and advertising.

Our first speaker was Allen Wasler, managing editor of CNNMoney.com. He mentioned how he uses instant user statistics to decide whether to move stories up or down on the business homepage. It definitely reminded me of user-driven sites such as digg, which allow users to vote content up or down.

Later we heard from CNN Chief Photojournalist Jeff Kinney and Senior Photojournalist Danny Meara. At one point, Kinney compared the pressures and necessity of filming in Iraq to that of a Jennifer Lopez red carpet event. Following their talk I asked Meara if he was at all concerned with the blurring of news and entertainment, especially considering the lead story on the CNN homepage at that time was Anna Nicole Smith. He basically told me that news was entertainment and vice versa. New organizations need to attract viewers in order to maintain some sort of profit line to keep operating.

Later in the day, our group had the pleasure of hearing from Jack Cafferty, a political commentator for “The Situation Room.” I think for many of us, he was the highlight of the morning. He was dissappointed in the amount of coverage that was being given to topics such as Anna Nicole, felt that cross-promotion with advertisers, such as one that the Time Warner Global Media Group did with Home Depot, could have an effect on the public’s perception of their journalistic credibility, and stated that he felt that CNN was not necessarily a public service, as there were always advertisers and profit margins to be concerned about.

It was interesting that while the journalists made it clear that money and advertising was a factor, the advertisers were quick to say, during their talks, that CNN was a public service and that their work, be it influencing consumer behavior or managing the assets of the Time Warner global media group with other “Big Brands” was only to allow people like Cafferty his time on air.

At the New York Times we met with two editors whose names escape me at the moment. We discussed what it takes to get to work at a paper like the New York Times, and the paths that some of the current staff have taken to get there. The photo editor also touched on a growing problem he has seen with Internet and the rise of search engines such as Google. His argument was that, while companies such as Google continue to grow and remain very profitable, newspapers, who actually develop the content that these search engines often point to, reap none of the benefits, while still incurring the costs of doing quality journalistic work.