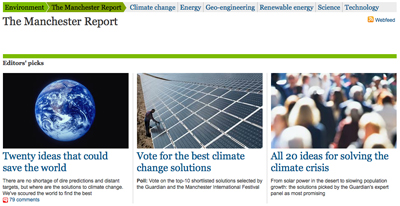 The Manchester Report, a join venture between the Manchester International Festival and The Guardian, is an effort to address climate change by inviting scientists, engineers, campaigners and members of the public to submit their climate-saving ideas.

The top 20 ideas were presented to a panel that was chaired by Lord Bingham, Lord Chief Justice of England and Wales, the most senior judge, until 2008, and included Dan Reicher, director of climate change and energy at Google.org; Bryony Worthinton, director of Sandbag.org; Chris Goodall, editor of carboncommentary.com; and Prof Hans Joachim Schellnhuber, founding director of the Potsdam Institute for Climate Impact Research.

According to Ian Katz, deputy editor of the Guardian responsible for environment coverage, “The ideas heard in Manchester ranged from the wackier edges of science fiction to well-advanced products poised to roll off production lines.” Ideas included giant algae stomachs, and idea similar to that of Invent Your World Competition winner Javier Fernandez-Han, energy bonds and ships that increase the whiteness and size of clouds.

You can view brief descriptions and video pitches of each idea here.

The Guardian is also encouraging its readers to vote on their favorite idea out of the panel’s top ten.

Which idea is your favorite? What do you think is the best way to use technology to address climate change?